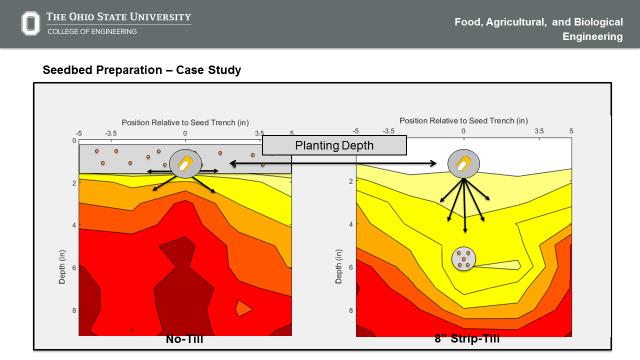 Mike Petersen here, we at Orthman have joined hands and feet as well as a 1tRIPr strip-tillage implement to the Agricultural-Bioengineering Department at Ohio State University to investigate how strip-tillage can be effective in the corn-soybean rotation of the Eastern Corn Belt region.  Specifically Ohio, Eastern Indiana are the states being considered. The program is to gain solid data on the intensity (low to high) of soil compaction in No-Till situations as well as Strip-Tillage, these are two tillage systems that are being promoted for conservation, fuel reduction, improvements in Soil Health, economics, reducing labor, improvements in placement of nutrients and crop health.  Dr. John Fulton and his very capable research assistant Trey Colley III have released some good data through the publication “2017 eFields Report” that I want to share as we await on the 2018 results which I will be reporting as soon as we have it in our hands.

Within this tillage study at the Western Ag Research Station near South Charleston, Ohio; the field scientists strip tilled, gaged all against Direct Seeding (No-Till) with varying downforce at planting time.  Soybeans, a Pioneer variety was planted at 130K seeds per acre.  The planter used was a CNH 2150 16 row planter with Precision ‘DeltaForce’ downforce controls.  The measurements were taken early to see what would happen with emergence and then to yield.  Also the scientists studied running the shank strip-till tool at 4 inches and then at 8-9 inches to determine if yield would be impacted.  August and September 2017 remained drier than seasonal norms which influenced yield retreats.

Fig. 1   Depiction of the 2017 study with Soybeans to determine the effects of No-Till versus Strip-Tilled to 8 inches with fertility/nutrients surface applied in the Direct Seeding (shown on the left) and positive placement below the seed with the 1tRIPr tool (shown on the right).  Nutrient source (dry fertilizer) was broadcast in the No-Till and precision placed at 4.5 inches behind the 1tRIPr shank.  You are seeing rootzone as the seed would be placed.

Fig. 2  Depiction of the Strip-Tilled zone after the planter pass at the heaviest downforce applied versus the 100lbs of force.  The soil compression was minimal to the rootzone.  Image to your left.

The soils in this field of the study are Kokomo silty clay and Strawn-Crosby complex, about a 40-60% proportion of the field.  Mr. Colley was then tasked to look at what the differences may be with emergence in where No-Till as the control is compared to Strip-Till with the same varying downforce applied.  The following chart describes the results for emergence and then yield.

Table 1.  Data depicts that at the higher amount of downforce in these silty clay soils the emergence was down from the 88% with No-Till but then at harvest the yields were same.

As we see this after the facts are in, the No-Till system and the Strip-Till system are very similar in results.  The seed-to-soil contact was slightly different in the very beginning yet it is our observation that the rootzone allowed the root system to expand and obtain nutrients and water equal to if not slightly better during the dry period that western Ohio experienced from July 16 to October 1st.   During that 45 day period 3.05 inches fell in several small showers of 0.1 to 0.3”  with dry warm days in the low 80’s.

No statistically significant yield benefits to utilizing different downforce control systems on the planter, however the OSU scientists felt there was emergence differences.

The highest downforce level achieved di not over compact the soil

Strip-Till very effectively reduced the compaction in the soil which from the field observations and early plant stage root digs showed improved root proliferation of the soybean plants.

We will be offering further results from this study in a follow up report from Mr. Colley’s research efforts.  Do stay tuned!