Down and Dirty Back in the Pits – Again … And Lovin’ It! 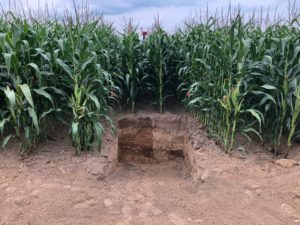 So for many of you the year has been a doozy with wet then dry and then wet, then hail for some that makes record size in the state of Colorado as well as fields obliterated and tussle with insurance companies.  During the week of August 13 & 14th we went up north into central Michigan and participated in the AgroExpo.  It was a great opportunity for folks to come and see what is working, what is new, what happens with high quality fertility ideas which all promote better ways to be more soils and water resources conscious and even more efficient.  Two of us from Orthman Manufacturing did our part to commuicate with growers the highly effective method of strip till and pre-plant nutrient placement.

With today’s population that live in the Great Lakes region, the issue of water quality, algal blooms, toxin waters for man, avian life and fish – part of the root cause has been pointed to the world of Agriculture and application of phosphorus either commercial or animal manures.  This concern has magnified itself a great deal in the last 4 years.  Lake Erie and Lake Michigan, both are in the lime-light of the public eye.  We at Orthman are much aware and can offer a role to play by suggesting the incorporation of strip till into the way farmers apply nutrients and till the soil.  Placing both phosphorus [P] and potassium [K] in the soil to reduce both mobile silt & clay running off the surface with phosphorus bonded to the soil and organic matter and soluble phosphorus that moves in and through the soils.  We had the opportunity at the soil pit-talks and at the Information Center at AgroExpo to address such and the smart move to place P & K in the upper portions of the subsoil or subsurface.

As you noticed from the picture to the right, we had a pit about 4 ft deep to show differences in root proliferation where starters were applied and other 6 row plots where there was no starter and follow-up changes in N-P-K applied in 30 inch row Pioneer 9608 corn.  As a soil scientist, I am a big believer in what the soil tells us in nutrient and water management via the  health, vibrancy and size of the root system.  I have dug in way over a thousand soil sites to reveal the real story below ground.   I thoroughly enjoy getting down at the moles viewpoint to see the morphology of soils, what has gone on since man broke the land, erosion or sustaining of the soil and what are the soils potentials.  The above-ground portion of the plant may appear okay, but dig down to 4 feet and we have a chance to reveal the secrets.  If the soils have far too much tillage I can tell, if the soils are compacted – I can tell, if the soils were not right (like too wet) I can tell.  Roots will always reveal the good, the bad or the absolute ugly.

So at this neatly done root pit we looked at what differences were visible and measurable from no starter and with part of the starter applied before planting with the 1tRIPr (AgroLiquid owns their own 6row-30) and part of the starter on the planter.  Oh significant differences both below ground and then 3 plant characteristics above ground to tell the story why starters have a “front row, center seats” importance to the crop.  First the root system of the no starter, had 80% of all the roots in the upper 11 inches, 11-16 inches was 15% and down to 34 inches was 5% by volume.  In the split applied starter plots, 65% by volume of the roots were in the upper 11 inches, 11-22 inches was 25% and 22 to 36 inches was 10%.  Clean sand and gravel was below the 36 inch depth and roots stopped there.  As you stare a bit closer at the soil pit image, at 29 to 36 inches below the surface was a layer of darker colored clay loam which sat atop the sand and gravel and both held water and slowed the movement of water rushing through and on out the bottom.  Comparing some more plant data; the height to the flag leaf in the split starter plot – 5% taller than that without, the size of the ear leaf on the split applied starter package from AgroLiquids was 11.25% larger both in length and width compared to the plot without.  The node-to-node spacing on the split applied was extremely even from the ground to the ear placement on the stalk in the split applied plot compared tow without.  The distance from the ground surface to the ear placement was somewhat erratic in the no starter, ranged from 91 – 115 cm.  In the plot where the starter is applied in two applications and times, 92 to 95cm above ground.  Very even and I look at 21 plants in a zig-zag fashion down through the plots measuring.  Darn good way to keep bias out of the observations.  Lastly I pulled ears, stripped back the husk and counted rows and length of the kernel set; in the split applied 18 rows around X 42 in length at 35,000 plant population, in the no starter, 16 around X 39 in length.  That is a difference of 132 kernels more on the split applied.  I believe all should say there is some significant differences.  The total amount of nitrogen remained the same across all 5 plots, with sidedressed nitrogen via Y-drops at 70 gpa.  Having the products applied directly with the seed at planting and then at 4 inches down directly below the seed and where the root will run right into more, so the plant incrementally gets a chance to consume good groceries.  Just what the doc ordered.

With this soil above the clay loam layer at 30 inches or so being a loamy sand it is both a concern and a reality that N will move downward and slow and be absorbed onto the clay where the roots can and did feed.  With more roots filling the upper 22 inches and remainder into the clay in the split-applied approach, the corn is showing what it likes.  AgroLiquids utilizes their trademark Pro-Germinator, Sure-K and Micro500 package for starter in these comparisons.

Over the two days my co-worker Adam Souder and I spoke with folks from all over central Michigan, Ontario Canada area, northern Indiana, the thumb region of Michigan, some folks from Utah, Oregon, Minnesota.  Our story stayed the same, managing your fertility in increments during the growing season will meet the crop demands better and does not fertilize the soil per se, feed the plant when it’s higher demand periods are.  Yes that depends upon what the sky throws at you but as close to those critical periods. AND remember it is not just about nitrogen; sulfur, potassium as well as P with micro’s are very important.

We at Orthman Manufacturing want to thank the AgroLiquid staff and field guys for all their efforts and potentials.  The two days were what we hoped they would be.