Digging to give you the best information regarding soils as I know how. 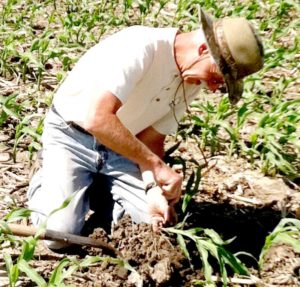 Recently I wrote some important points to consider when you are dealing with compaction not only in the fall but the springtime. I have been chasing issues growers have found to be pesky and reoccurring since the era of 1981. I am here to tell you I have caught up with soil compaction and have been able to spot it from a highway at 65mph. Sometimes it is whoa and stop to get out, walk across a fence and stick a probe or spade in the ground to see what is the intensity of the problem. If the grower stops by we get into a great conversation almost everytime.
So I am reading this article in the Indiana Prairie Farmer which I am going to quote from what this man David Nanda says. He is director of genetics for Seed Genetics Direct, sponsor of Corn Watch ’20.

The article begins by Tom Bechman: Dave Nanda insisted on this picture showing the remnants of boot prints in the Corn Watch ’20 field in August. This year we implemented an emergence plot to study differences in corn plants based on when they emerge. The boot prints were made when I placed flags in muddy soil after a heavy rain on the first day corn decided to emerge. If the first plants aren’t flagged when they emerge, it defeats the purpose of tracking emergence until all plants come up.

“They were 6 inches deep in a few places, and they’re still hefty prints,” Nanda says. He is director of genetics for Seed Genetics Direct.

“I wanted to document that they were still there in August because it shows that once soil is compacted, the compaction doesn’t go away quickly,” Nanda says. “And it doesn’t matter if soil compaction is created by a 250-pound man or a tractor weighing 10 tons or the planter disc forming the sidewall. Once it’s there, the impact on the soil can continue for a long time.”
I, Mike Petersen, have been saying for nigh on 40 years what comes next from this person Dave Nanda.

“As long as there is ample moisture, the soil compaction won’t likely impact those plants more than it already has during early-season stress,” Nanda says. “Visible differences might occur if it turns dry again.” How-em-ever folks, too many farmers in the latitudes north of the 38th degree parallel feel that the soils will freeze and thaw a few times and all will be fine. Oh brother where art though? To quote a funny movie from a few years back… No such thing. We are wanting more power to pull large disk-rippers (400 to 620hp tractors), 1000 to 1500 bushel grain carts, silage trucks for those who cut big semi-loads of corn silage, 13 shank subsoil tools, big red, blue or green disk-chisel implements over 35 ft wide and go 6 mph with bounce in too moist of soils and install compaction. Or, those 36 to 48 row planters when soil conditions are wet and the thought process “we gotta go”. Oh my! Do I understand? Yes, Maybe and then No.

Tom Bechman writes further into the article; “When soil compaction was first recognized as an issue in the 1980s, many people assumed that freeze and thaw cycles would correct it over time. The same university studies indicate that while these cycles can eventually help break down compacted layers, they typically don’t help as quickly or as much as most people originally suspected. Even in locations where there are normally several freeze and thaw cycles during the winter, soil compaction can persist over time.” I am quite pleased to see this article written and to bring a portion of it to you. You can go on-line and read it via this hyperlink

I am glad to hear others saying this. Standout researchers up north near Morris, Minnesota – yes that is cold Minnesota where it freezes up tight many winters – stated it takes 14 cycles of freeze-thaw to break compaction up by ice crystals and wedges. But folks, that may happen only in the surface two inches (5 cm). What about 7 to 11 inches deep? Once for the total thaw-out.

What I am suggesting here? When you see ragged ups and downs in your corn or soybean heights, or intervals of tracks early on where the corn is stunted or discolored with purple tinted leaves or later two rows spaced 60 to 90 inches apart that are shorter, smaller leafed and roll in the midday sun – the 800 pound compaction gorilla has come to stay. Do check it out, see how extensive it is, is it in the entire field of just on the turn row ends? How deep and thick? Right now with fall harvest time in front of you the proof will be in the combine and trailer to haul it to market. Watch your mapping tools of that screen in your combine and the results of the yields – it will be evident or not.
We at Orthman Manufacturing study the compaction issue; because we have a lineup of Territory Rep’s to explain and digest the conditions, we can help you wade into what comes next in the alleviation of soil compaction. Do not just go get the subsoil tool and go to ripping the silly out of every acre at 15 inches deep – please! Call or contact me if you like. As a scientist that has been in the soil trenches and digging about in about every state of the Union I am happy to offer clues and suggestions. Do not hesitate to go to the tab CONTACT US on the home page of this site and visit with any of us.