Improving Soil Health – What Might it Mean to You! 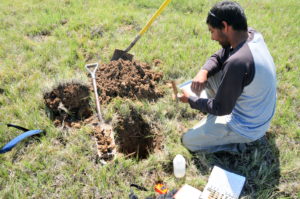 As I continue to read, investigate, learn and dig more into soil profiles across this nation I am all flushed with material I want today’s farmers to realize.  The interaction of bacterial, fungus, fungal hyphae, simple photosynthetic bacteria, algae, protozoa, and other microscopic creatures all are important to what your crops can benefit from.  The splatter and news some of you may read about cover crops, more living roots in the soil all have an umbrella approach to this subject of “soil health”.  To get our noses right into the subject – it is what happens biochemically in the soil along with the physical side of soil aggregates making a stable home for all of the microscopic creatures to live, respire and offer to the roots to absorb and thrive from.

As fungal biomass improves in the macroaggregates of the soil profile (I am speaking of the upper 10-14    inches), organic materials become broken down into smaller and smaller particles along with fats/lipids/oils/steroids and some proteins that are sticky to hold silt and clay particles together.  As the individual silt particles and clay particles bond together both by physical forces and electro-chemical bonds, with gravity playing it’s part — soil structural units form.  These structural units of micro-sized blocks and prisms then in time adhere together to form larger blocks, prisms and granules.  As they do our soils allow water to pass in a downward fashion vertically and as that all occurs so will the roots which will exude, slough both dead and living cells, leave smears of organic sugars, peptides, and proteins and strands of a mucous like substance from the root tips to makes soil structural units even stronger and larger.  In a nutshell – soil health and quality improves.

All of this takes some time.  I have observed in continuous strip tillage we can facilitate all of these details of soils regenerating after the change from full width tillage systems.  A caveat, removing from a corn field and baling up for animal bedding is not helping.  To accelerate the soil rebuilding having a mix of crop residues (some left-over residues that are higher in sugars such as sorghums), green living roots, legumes in rotation, where possible and or feasible – cover crops, all will aid in this rebuilding.  As we annually crop fields with too much tillage [full width tilling], multiple passes, removing of all crop matter such in silage harvesting; we set the soils back to something like a war-zone battlefield and unexploded ordinance remains.  A proverbial mess of the soil health.  Yes that is a fairly strong statement, I know.

We at Orthman Manufacturing so believe that conservation tillage by the strip till system works to put soils in a better condition to grow crops and enrich the soil health capacity.  As farmers urge their soils to produce more with precise placement of fertilizers, provide timely irrigation for those areas where irrigation is accomplished, maintaining residues on the soil surface as long as one can we are seeing soil resources produce many, many fold the grain, forage, lint or produce.  Along with this, soils can not only be sustainable, healthy, and very productive for years to come.