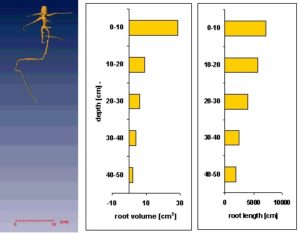 Fig 1. Example of compacted root system of canola visualized by X-ray tomography Courtesy Univ. of Adelaide, Australia, 2004 Lateral root expression at 12 to 15cm depth due to compaction. Root volume is then 80% of the root mass is in the upper 20cm (8in).

As I wrote last week that I would update you the reader of the PrecisionTillage blog on more facets of rooting, tillage, nutrient uptake and also water uptake. As I peel a softball sized onion of how soils are so important to every nuance of crop growth, I find more research I need to read, digest and cover to provide you important clues on how to raise a profitable yield. Over the course of a few days working here at my office I have read some interesting material.

Han, Kautz & Köpke (2015) observed in a study of crops following chicory (a taprooted plant) and a planting of tall fescue which produce quite different root systems. In their research growing barley after the taprooted crop vs fibrous fescue, the roots sampled after the tap rooted chicory resulted in a higher Root Length Density (RLD) of two upper root diameter classes (medium and coarse roots; 0.38 cm cm−3) in comparison to tall fescue (0.23 cm cm−3). Roots come in four root diameter classes, very fine (<0.1 mm), fine (0.1–0.2 mm), medium (0.2–0.5 mm), and coarse roots (>0.5 mm). Their data suggest the root architecture of precrops resulted first in different patterns of soil biopores, second in a different morphology of the root system of the subsequent crop and third in amount of soil explored by subsequent crop root systems. Their work detailed that roots of the fine and medium diameter size increased the RLD overall.

In research efforts we carried out at the Irrigation Research Foundation (2004-2007), we determined that with a Strip Till then plant approach in irrigated corn the medium and fine roots increased 4.4X in number under strip till compared to a chisel/disk/springtooth harrow then plant system. Consequently the water infiltration rates improved from 0.6in/hr to 2.9in/hr and more in the 3 year study.

Modeling with X-ray tomography methods in Germany researchers have determined that soils that are compacted (in the upper 25cm-10inches) rely upon the biopores throughout the soil profile in small grains to take up water, nutrients, exchange gases (O2,NO, CO, CO2, etc) and to penetrate greater depths [M. Landl, A. Schnepf et. al, 2019]. Using some modeling processes the researchers simulations suggest that the influence of biopores on root water uptake differs for different soil densities as well as soil types. Due to the larger increase in rooting depth, vertical biopores had a more beneficial effect on root water uptake in more compact soil. Furthermore, the effect of biopores was more evident in a sandy loam than in silt loam due to the sandy loam’s higher soil hydraulic resistivity when the soil was nearer to hygroscopic water conditions. Landl and her fellow researchers went on to say, the positive influence of biopores persisted even under the assumption of reduced root water uptake in biopores due to limited root–soil contact within the pores and was larger for dense soil than for loose soil, again this was specific to sandy loam textures over that of silt loam soils. Improvements of 9-24% more. In Figure 1, the canola plant root (a taprooted crop) followed an old biopore until it hit the compacted zone then turned lateral. 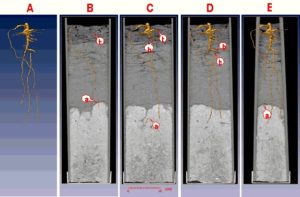 The images to the left depict a series of the X-ray tomographs from 60 days after emergence to approximately 112 days after and what transpired with root development as it encountered the compacted subsoil. The red letter “a” points out across B-C-D-E where the roots enter biopores to penetrate the compacted zone.

Comments and Suggested Conclusions:
Both sets of authors I have referenced here have quantified to a degree that roots from subsequent crops are influenced significantly by size of biopores from previous years and tillage. Our work at the IRF verify that old biopores that are still in tact and continuous into the subsoil influence root development and water uptake. We determined in the IRF study that strip till played a significant role in larger biopores being developed in corn and accentuating roots to penetrate further into the soil profile.

These kinds of data for me say that a crop rotation of crops that leave larger pores (medium and large as described above) have a role in water management, potential drought survival, more potential for the crop to develop a robust root system and possibly yield improvements. It is a goal of ours (Orthman) this coming summer with aid from an intern and the Vo-Ag students carryout some root length density observations where we will be 2 years corn on corn compared to last years soybean crop. Keep tuned in.